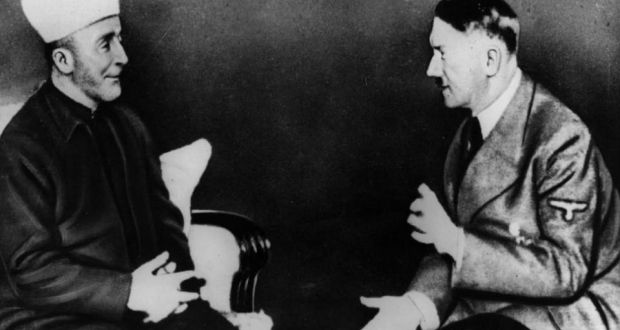 Yad Vashem Chairman Dani Dayan has defended the museum’s decision to remove from display a photograph of the 1941 between Grand Mufti of Jerusalem Haj Amin al-Husseini and Adolf Hitler. Dayan claims that including the photograph is “tantamount to partaking in the debate on the Israeli-Palestinian conflict.”

While some experts say that the mufti was concerned more with amassing power than annihilating the Jewish people. But this is irrelevant. The mufti was the main Nazi aide, outside of Europe, who was instrumental in the recruitment and training of the SS soldiers whose main task was to strengthen Hitler’s regime by systematically murdering European Jews.

The marginalization of the mufti’s contribution to the Nazi war effort is not only dishonest but dangerous in that it sets a precedent of excluding inconvenient facts. For example, the Nazi ideology very much resonated with the Muslim and Arab world, where it continues to do so, today.

The floor-length photo once graced the museum walls. Dayan at first attempted to deny that the photo was ever displayed at the museum. But there have been too many visitors to witness the before and after for the chairman to continue his fake denial. “Those who want me to put it up aren’t really interested in the Mufti’s part in the Holocaust, which was limited anyway, but seek to harm the image of the Palestinians today. The Mufti was an anti-Semite. But even if I abhor him, I won’t turn Yad Vashem into a tool serving ends not directly related to the study and memorialization of the Holocaust. Hasbara [public diplomacy] … is an utterly irrelevant consideration that shall not enter our gates.”