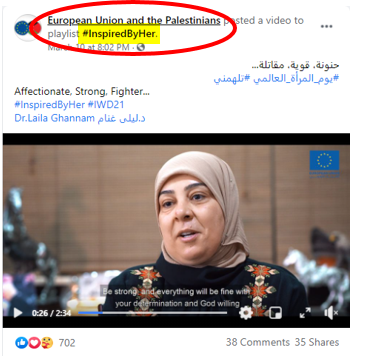 International Women’s Day is a time to celebrate accomplished women. What it’s not: a time to celebrate women who glorify terrorists responsible for the cruel murder of Jewish civilians in Israel. But go tell it to the EU, who featured Ramallah and El-Bireh District Governor Laila Ghannam under the hashtag “#InspiredByHer,” for International Women’s Day.

“Among those celebrated by Ghannam,” continues the PMW website,
“are terrorist Dalal Mughrabi – murder of 37; Jewish baby murderers; murderers of Jewish female teenagers; and many others.”

Because of her support for terror, Ghannam has already been stripped of an award from the Philadelphia City Council. But if you think the EU will follow suit when PMW tells them what they’ve done, don’t hold your breath. Europe, if you’ll recall, killed millions of Jews during the Holocaust. Celebrating a woman who celebrates terror is just more of the same: what our history tells us to expect from Europe.