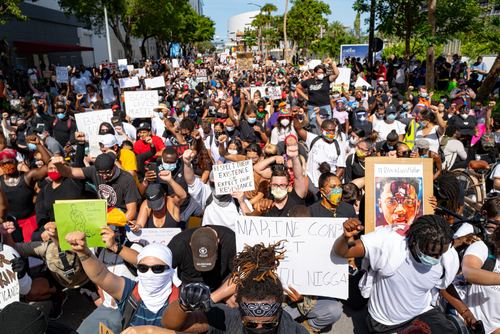 Jews have a special sensitivity about racism and some are taking part in the protests in the aftermath of the murder of George Floyd. But some say Black Lives Matter (BLM) is an Antisemitic organization. On June 5, for an example, Israel Hayom carried an op-ed by Caroline B. Glick detailing the relationship between BLM and the BDS movement which seeks the destruction of the Jewish State. Glick says it plainly:

“Black Lives Matter, the radical group leading the demonstrations, is an anti-Semitic organization. BLM was formed in 2014 as a merger of activists from the anti-Semitic Nation of Islam, the anti-Semitic Black Panthers and Dream Catchers. In 2016, BLM published a platform that has since been removed from its website. The platform accused Israel of committing “genocide” and referred to the Jewish state as an “apartheid” state. The platform accused Israel and its supporters of pushing the US into wars in the Middle East. The platform also officially joined BLM with the anti-Semitic BDS campaign to boycott, divest and sanction Israel. BDS campaign leader Omar Barghouti acknowledged this week that the goal of the BDS campaign is to destroy Israel. BDS campaigns on US campuses are characterized by bigotry and discrimination directed against Jewish students.”