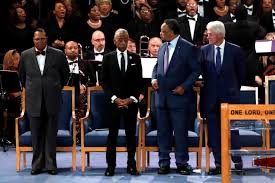 Comparing Jews to termites is anti-Semitic, wrong and dangerous. The responsive laughter makes my skin crawl. For everyone who rightly condemned President Trump’s rhetoric when he spoke about immigrants “infesting our country,” this rhetoric should be equally unacceptable to you: https://t.co/EvFp4ULugm

Her dad Bill, meanwhile, doesn’t seem to have any problem with Farrakhan (or Al Sharpton or Jesse Jackson). Or else methinks he would have sat elsewhere at Aretha Franklin’s funeral.

Perhaps Chelsea should have a talk with her dad?