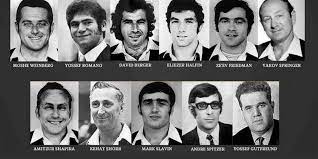 This week’s 50th anniversary of the Munich Olympics Massacre prompted noted blogger Elder of Ziyon to share some facts about the 1972 massacre, in which 11 Israeli athletes were murdered. These are the facts you may not have seen covered in the mainstream media. Here’s a summary:

The attack was financed by Mahmoud Abbas, president of the Palestinian Authority (PA), Israel’s supposed partner for peace.

German security officials received intelligence regarding the attack three weeks before it happened. The tip-off came by way of a Palestinian informant through the German embassy in Beirut. Takeaway: Germany knew and did nothing to stop the attack.

The terrorists received help from local neo-Nazis, though the Germans said it was the German left. As always, Nazism is intersectional with Arab terror.

Black September was thought to be responsible for the attack, but in fact it was Arafat’s Fatah. Abu Daoud was quoted in Arab media in 1972 as saying, “There is no such organization as Black September. Fatah announces its own operations under this name so that Fatah will not appear as the direct executor of the operation.”

The terrorists didn’t simply kill the victims, but did so cruelly, even castrating weightlifter Youssef Roman in front of his team members.

Two of the three surviving terrorists were released in exchanged for hostages from a hijacked German Lufthansa flight. According to EOZ, last month TheJC reported:

“We have found documents that state that the German government asked the Palestinian terror organisation to fake the hijack of a German plane in order to be able to set them free — and for doing so, a month after the heinous terrorist attack, the Palestinians were paid nine million dollars,” Dutch lawyer Carry Knoops-Hamburger, one of the team negotiating with the German government for compensation for the victims’ families, told the JC.

Finally, even today, the Munich Massacre is still praised by Palestinian officials as “heroic.”

Elder of Ziyon says that none of these facts were included in the AFP’s summary of the massacre.