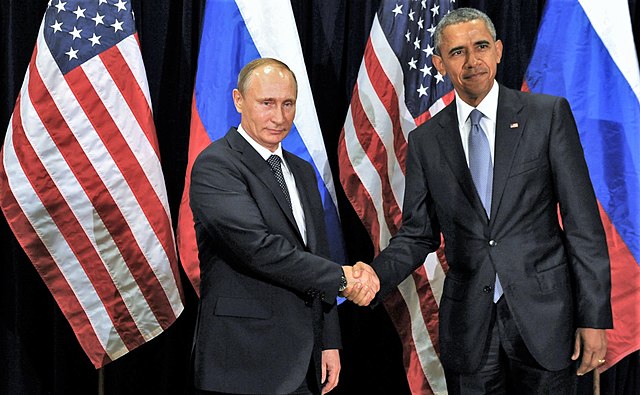 Growing up, it seemed like the Cold War would never end. It was a big deal when it did. But it seems that Obama brought it back to life again. And President Trump has invited it to stick around.

So says veteran columnist Caroline Glick, who lays it all out for us in her piece Portents of a Quagmire in Syria:

So far, the Americans have made every possible mistake in Syria and Iraq.

Then president Barack Obama allowed Assad to commit a genocide of Syria’s Sunnis and foment the refugee crisis in Europe. He allowed Iran and Hezbollah to take over Syria and Iraq. He allowed Erdogan to organize an anti-Assad rebel force dominated by the Muslim Brotherhood, which over time morphed into ISIS. He allowed the Russians to use the war as a means to reassert their position in the Middle East 33 years after the Soviets were humiliated and expelled from the Levant.

For his part, Trump has maintained Obama’s Syria policies in relation to Russia, Iran, Hezbollah and Assad. He expanded US military assistance to the LAF. He permitted Iranian militias controlled by Iran’s Revolutionary Guards to cooperate with US-trained Iraqi forces in seizing Kirkuk from Kurdish forces. In so doing, Trump betrayed the Kurds, the US’s only reliable allies in Iraq.

If the Americans wish to maintain their record of failure, they have many options for doing so. They can abandon the Syrian Kurds. They can help Putin by underwriting Syrian reconstruction.

They can continue to arm the Hezbollah-controlled LAF. But the Americans do have an option to succeed, as well.

If Trump keeps US forces in Syrian Kurdistan, and if he refuses to help pay for Syrian reconstruction so long as Assad remains in power and Iranian and Hezbollah forces remain on the ground and if the US ends its civilian and military assistance to Lebanon, the US and its allies will be strengthened, and Russia and its allies will be weakened.

If the Americans do not interfere as Syrian “freedom fighters” defend against Iranian or Russian “aggression,” it won’t matter what terms the Iranians give Putin for gas, or oil or nuclear deals. He will seek a way out of Syria.